You are using an out of date browser. It may not display this or other websites correctly.
You should upgrade or use an alternative browser.

VIP Member
As per title, have searched through the forums and sure I saw a post about this but cant seem to find it.

When on setting 1 the temperature is all but freezing, this hasnt always been the case and was wondering if anyone has had similar issue and been able to reset it somehow?

Had the same problem. Would get to my destination and the food and drinks were frozen.
After several visits to the dealer for adjustment, none of which worked, I ended up with a new fridge
T

I have also got the same problem?
Was the fridge covered by warranty?
And when you got you fridge replaced - how did you do it

Many thanks in advance!

Seems a common problem with Westfalia fridges, usually it's the temp sensor/thermostat and to quote a German website:

"The temperature sensor of the Mercedes Marco Polo in the Westfalia kitchen is very built in, which makes replacement difficult.

We offer the original Mercedes spare part including installation. We need about 2 hours for the installation."

Thank you - I shall chase Mercedes as the van is under warranty... Just!!!
E

We also got an always-on fridge when the van was just 1 year old. It was replaced under warranty after slightly spoiling a trip (battery running flat, coke cans exploding). It is an usual fault.
The replacement part number from Mercedes is apparently Q900001523398 (can't confirm 100% - it was the part number for the pre-2015 Marco Polo fridge thermostat and it looks like the same part) and costs about 45€.
M

enano said:
We also got an always-on fridge when the van was just 1 year old. It was replaced under warranty after slightly spoiling a trip (battery running flat, coke cans exploding). It is an usual fault.
The replacement part number from Mercedes is apparently Q900001523398 (can't confirm 100% - it was the part number for the pre-2015 Marco Polo fridge thermostat and it looks like the same part) and costs about 45€.
Click to expand...

How long did it take? We have the problem and local mb dealer says it’s at least two months
T

Wow this info is great thank you!!!
T

It seems my Marco Polo has a fridge thermostat failure as only temperature is freezing regardless of the setting on the control panel.

Just had it in to Mercedes Cheshire Oaks for Service A ( what a rip off as charged for windscreen wash and Ad-blue which I do myself, don’t need a £60 per hour technician to do that) and fridge diagnosis.

Mercedes Cheshire Oaks have no idea about Marco Polo and the overall experience was atrocious.

So can anyone advise on the following please:

Mikeandcarole said:
How long did it take? We have the problem and local mb dealer says it’s at least two months
Click to expand...

Sorry for the late post - it took them about 1 week to get the part and 1 day to change it, but it was before the pandemic and logistic woes.
That was at a Mercedes-Benz Industrial Vehicles service center in northwest Spain - no suit-wearing salesmen among shiny S-class cars, just mechanics in blue overalls among Actros and Arocs trucks and buses. The MP looks tiny there.
E

It seems my Marco Polo has a fridge thermostat failure as only temperature is freezing regardless of the setting on the control panel.

Just had it in to Mercedes Cheshire Oaks for Service A ( what a rip off as charged for windscreen wash and Ad-blue which I do myself, don’t need a £60 per hour technician to do that) and fridge diagnosis.

Mercedes Cheshire Oaks have no idea about Marco Polo and the overall experience was atrocious.

So can anyone advise on the following please:

Again, sorry for the late response.
1) I didn't replace it myself - from others experience it is very easy (remove old thermostat, insert new one) *except* there is no room to comfortably remove and reinstall the cable. So you can either remove the complete fridge, or be creative. Some have reported success using the old cable to pull the new one in place.
If you do that, use the supplied cable as-is, and don't cut or shorten it.
I wonder what is wrong with the Westfalia thermostat -- there are lots of reports of broken sensors.

2) I would actually recommend a dealer but it is 2.241km away from Cheshire Oaks. On the other hand, I've heard worse excuses for a trip.
Last edited: Feb 7, 2022
A

VIP Member
Our Marco Polo fridge is model number RC1144 after a lot of enquiries and several emails to different companies, my wife has just tracked down a thermostat,
https://coolandshop.de/p/temperaturfuehler
we have ordered one from this company, the website is all in German but google translate helped. The total price was 70.17€, that included international delivery, not sure yet whether we will have other import duties to pay. I have looked at the fitting and it will be fiddly but fairly straight forward. It does not require the whole kitchen to be removed, just a matter of attaching a cord to the old thermostat wire,
so you can use the cord to pull the new wire through
We could have ordered a thermostat direct from Mercedes for roughly £65 but they were unable to give me a delivery time unless I committed to buy and I didn’t want to be left waiting for months. Hopefully the one I have ordered will turn up quickly.
I’ll keep you posted.
A

VIP Member
Just a quick update, the replacement thermostat arrived today with no added charges, so a good price £59.45 and fast delivery
T

However, I have been informed that MB will only use parts sourced by them so will have to wait for the warranty repair.

If no change in the next month or so I will have to give up on them and do it myself as the Van will be needed for holidays.

VIP Member
Fridge is now working!
replacing the temperature probe (thermistor) was fairly simple although needed some thinking about before rushing in.
The main issues were, the limited space to work in, how to remove the old probe and it’s terminals in the 6 pin connector, and how to thread the new thermistor into place. The whole job took about an hour and a half (including problem solving). To add, I have no access to specialist tools, no specialist skills except common sense and determination.

1. Open the cover pic 1. Inside you will see pic 2. The white wire leads from the thermistor which you will find inside the fridge sunk into its wall. (Pic 4)
2. lever out the thermistor gently with a flat bladed implement, I used a screwdriver tip.

3. Now use a torch and look at floor level towards the back of the opening on (pic2) on the right side and you should see a plastic (mine was white) wiring connector block with 6 wires going into either side, ( 2 are from the thermistor - the middle two in my case) the other 4 red, blue, brown, black lead to the fridge. You will find (by touch) that two sides of the connector block can be pressed inwards in order to release and split to two halves of the connector block (Fiddly but not difficult).
once this is released you can withdraw the top half of the block ( follow the route of the white thermistor wire to withdraw it and it should then exit near where the red and blue wires are shown in pic 3)

4.As I said, I have no special tools- you will see that the wires are secure in the block and cannot be released easily, this is because the ’bullet’ end is fixed in the block by ‘wings’ extending from its shaft (pic 5 - removed bullet end)
to remove this from the block I cut the thermistor wires from the rear of the block and pulled the bullet head the the front of the block using a small pair of fine pointed nosed pliers.

Once this hurdle is achieved you can move on to removing the old thermistor and replacing it with a new one.
DO NOT PULL IT STRAIGHT OUT! 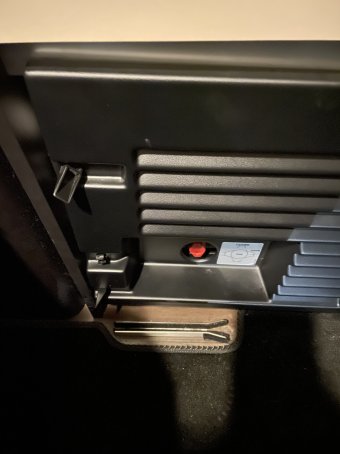 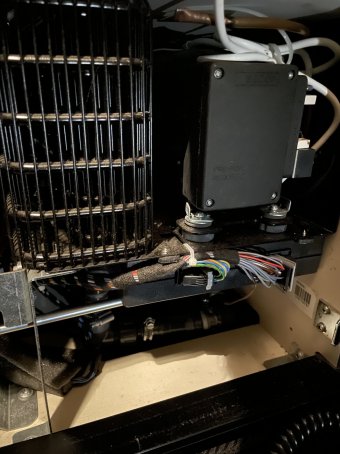 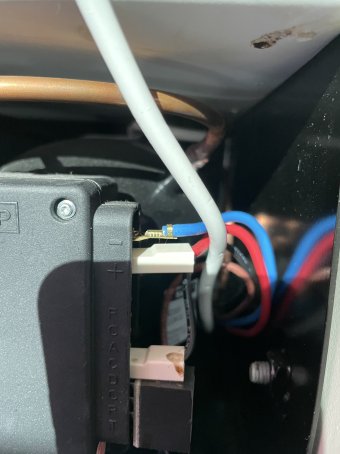 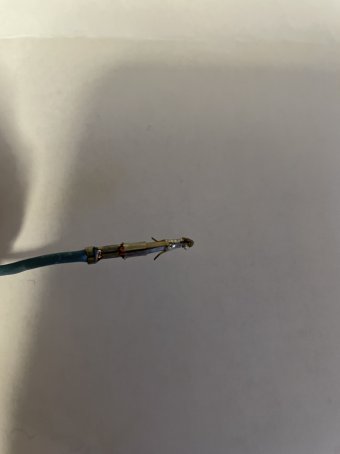 Use a cable tie to bundle any excess wire from the new thermistor.
Fix the wire back in the fridge box channel with new electrical tape.
Test the fridge - once you’re happy it works close up the panel.
1

This is very helpful - my difficulty though is that I can't see the white connector block, which seems to be buried behind the compressor and the coiled up thermistor wire, and there doesn't seem to be enough room to get fingers in to reach to it. Did you have to disconnect everything at the front connector block first to get to it?. With a few months of warranty left I think I'll leave this to MB to fix even though I suspect the dealer won't be much the wiser. Will the new sensor last any longer than the original I wonder?
A

VIP Member
Hi, I just managed to see the connector block with a torch at the back of the cupboard. I managed to separate it using one hand, pinching two sides together with my fingers. It’s quite a small space but accessible. Reassembly is quite simple as the block only fits one way so you can’t get it wrong. A little fiddly but possible. You can disconnect at the front if you wish (take a photo first) but I didn’t.

Hi all, just replaced thermistor wire following the above instructions, very simple to follow, even better if you have small hands… might order a spare as they seem to be a popular replacement - van 4 years old but it failed last summer.. Thanks for a great thread, very helpful.
P

The thermistor took 5 days to arrive from https://coolandshop.de/p/temperaturfuehler
1

That's helpful - just to be clear, did you just remove the old thermostat, cut the existing white and the two cable wires inside, and then connect the new one to the old wires so you didn't need to burrow into the works to get to that difficult connector block? Any pictures of the new connection? Mine is going to be replaced under warranty but its taking ages for the new thermostat to come from Mercedes in Germany.
You must log in or register to reply here.
Share:
Facebook Twitter Reddit Pinterest Tumblr WhatsApp Email Share Link
Top