If anyone is wanting to swap their 2017 style front console for a 2018 type with cup/drink holders then this is how you do it. Usual disclaimers... you may break things and void warranties and such. 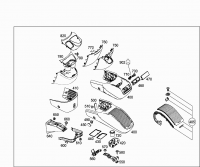 Not a lot of parts are actually needed... whilst the above looks complicated it covers every option so you have to be carful when ordering as there are multiple types.

I have made it easy as here are the actual parts needed including the actual EU part numbers: 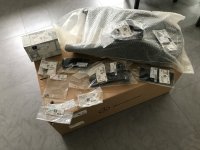 And arrives in a big box!

Use a flat blade screwdriver to carefully lever the console out at either side...

Just one cable to unclip...

Now lever off the two cover plates holding the console in on either side in the footwells and remove the torx screws... keep the covers and the screws for later you will need them for the new console.

Remove the media unit and 12v socket (very tight) and place to one side for later with the aux console two cover plates and two torx screws. 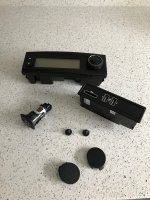 You now need to remove the old bracket held by two bolts. 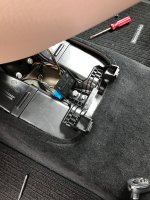 Now you have a choice... remember I said some parts were optional... well the front bracket would noe be installed in place of the old bracket... however it's installation requires the cutting of the carpet and underlay which is very thick. As the new console is already firmly held at the back and middle you can forgo installing the front bracket. I did not install it and my console is rock solid.

Prepare the new console, you first need to drill a hole in the bottom of your new console around 20-25mm for the cable to the aux control panel to pass through:

Then turn it over and thread some wire or similar through the media hole, 12v socket hole and their respective side ports to help pull the cables back through:

You need to ensure that the 12v cable and the media unit cable are untangled and routed around the vent pipes left and right in order to give them as much length as possible. If you don't route the cables around each the side of the roller unit the cables will obstruct the roller door from opening fully. Slide the console into place and pull the three cables through their respective holes. You can now fit the torx screws and cover plates. The rubber inserts can be placed in the bottom of the console and the drinks holder clipped into place. Route the cable for the Aux console that came through the hole you drilled to exit the rubber mat via the pull tab as there is a space there. Clip the blanking plate into the centre hole (don't screw this in from behind as if you ever want to remove the console in the future it makes it easier to unclip the cables using the central hole. You can now reattach the media unit cable and clip it back in with the SD card slot at the top. 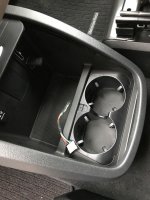 Next is where you have to get creative as although the control units are identical in the cars with the fitted drinks holders the bracket that mounts the control unit is factory mounted to the later console and not available by itself. So you can either buy a new console 780 Euros or use a bit of imagination.

I opted for the latter!

Cut the following shapes out of 3mm, Ply, MDF or hardboard. and glue to form a box. 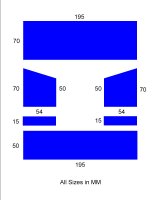 Check the fit... round off all the edges and spray black or cover in vinyl.

It should be a tight fit especially if covered in vinyl and friction should keep it in place. If it is a little loose some double sided foam tape or velcro will hold it at the bottom.

Hope this may help anyone attempting the same.
A

That looks really complicated. A very good result, though. Well done.
I thought your dealer agreed to fit it for you for free when you ordered the console through them.
A

askho said:
That looks really complicated. A very good result, though. Well done.
I thought your dealer agreed to fit it for you for free when you ordered the console through them.
Click to expand...

They Did... but then were told they couldn't by the management! but agreed to supplying the parts free!
S

I have a 2019 so already have the cup holder console but nevertheless, great write up. Thank you - appreciated

VIP Member
Had to nip out and take mine out and re-route the wires as you suggest. Now opens perfectly!
D

I found the reference number for the bracket of the Westfalia control unit and is a MB number, maybe is possible to order it. 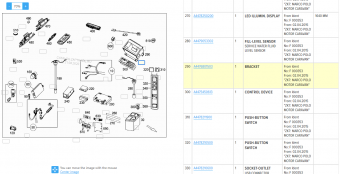 Deivo said:
I found the reference number for the bracket of the Westfalia control unit and is a MB number, maybe is possible to order it.

That’s useful as that part was not available separately last year!

I like the box askho. Do you mind if I ask where you got it?

I have the 2018 model with cupholders, but that area always just has maps and 'stuff' lying about and getting stood on! This looks like a great tidy solution.

Graham said:
I like the box askho. Do you mind if I ask where you got it?

I have the 2018 model with cupholders, but that area always just has maps and 'stuff' lying about and getting stood on! This looks like a great tidy solution.

It's actually a bin from Ikea. It fits perfectly in the gap. I have the lid opening from the back so you can easily drop rubbish into it from the kitchen area. I think the cup holder was from Amazon, if I remember right.

Hi all,
Having an early Marco without the drink holders between the front seats got me thinking at the weekend. Aside from Marco Polos I also have a bit of a fetish for Land Rover Defenders. So.... when doing a genaral garage tidy up I uncovered a Defender 'centre tray' that sits betwen the front seats. One look and I reckoned it may be a close fit.... on closer inspection it is a PERFECT FIT !!! No bolt down required, it is a snug fit.. A little bit of lining the drawers and cup holders with left over Land Rover carpet... and Bob's your uncle ! Looks like it always has been there! One last upgrade ordered today is a 44mm Merc bonnet badge ( for <£10) that will hide the faint Land Rover logo embosed in the plastic nearest the front.
The biggest benefit is that both front seats swivel perfectly with this in place
So the cost of the upgrade ?? To me so far nothing.. I had the Land Rover part...... to you... look on ebay and you can buy a tray for arounf £20. No tools required.... 10 seconds labour to fit... no squeaks or rattles.... seats spin around... and add a Merc badge for £10 if you're a snob like me
Job done !